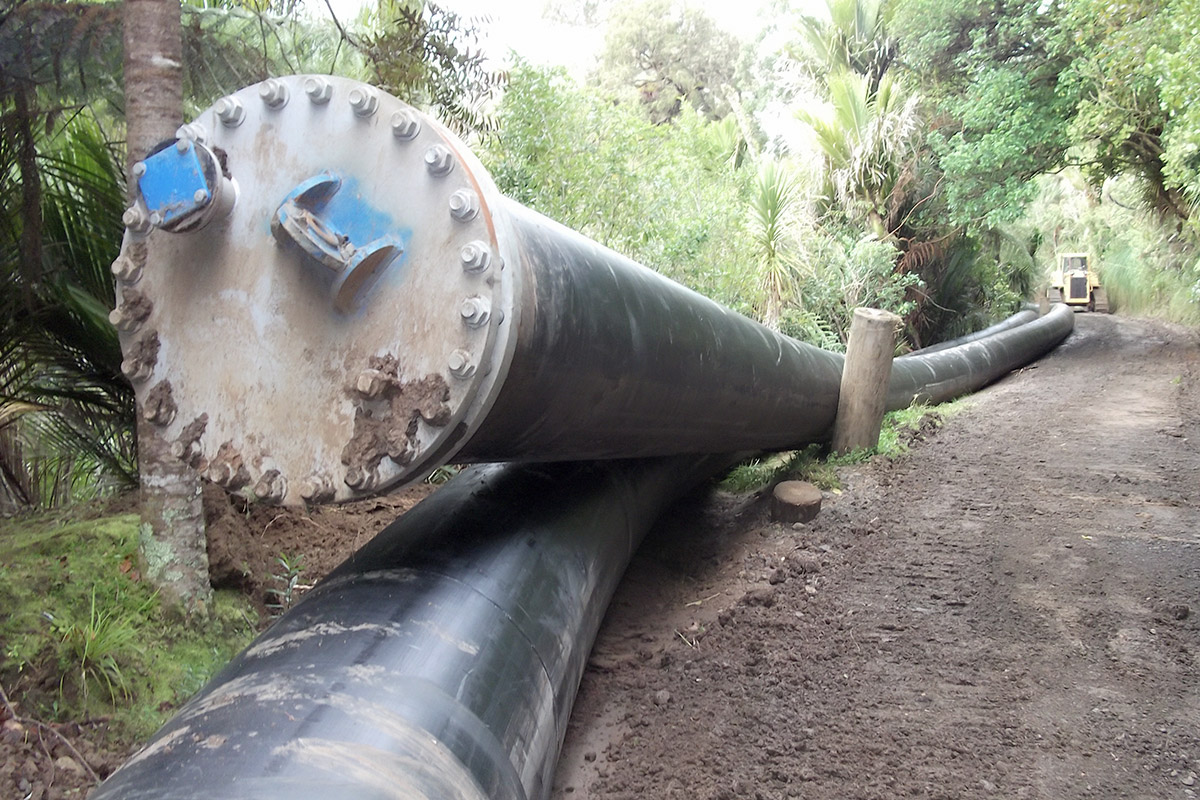 A new pipeline was needed to replace a failing cast iron watermain laid during World War Two, which traversed some of the most rugged topography and dense bush imaginable.

The existing cast iron watermain mostly mimicked the topography of the route and was left exposed in many locations. Ground movement and erosion led to high ongoing maintenance of the cast iron pipeline constructed in 3m long sections.

The new pipeline that Universal Underground would be installing was a siphon with a height difference between ends of 40m and a low point 80m below the high point. The pipeline would cross under five streams, pass beneath bluffs by up to 40m deep, intersect conglomerate gravel beds and pass through sections of faulted ground.

On completion the pipeline would offer a smooth straight alignment with an increased capacity, improved efficiency and near nil ongoing maintenance issues.

In order to keep the tunnel fluid pressure to a minimum, the drilling rig was relocated to the top platform. Fluid recycling was undertaken at the bottom site, before the cleaned fluid was pumped back to the drill rig at the top site and reused in the tunnel. The pilot hole needed to be enlarged to over 1 meter diameter and this was achieved with three reamer passes. Reaming of the first past went without difficulty for 800 meters until a sudden tunnel blockage caused the pressure in the tunnel to spike. This caused a tunnel fluid break through at “Tunnel Gully” resulting in a six week delay to the project while environmental preventive measures were established. Reaming recommenced. Break out fluid was collected at tunnel gully and pumped to the low platform for cleaning before being pumped back to the top platform for bentinite dressing and then pumped back down the tunnel. This new operation made progress very slow. Three sites working together to manage fluid in a calculated manner, ensuring the pump in the bush was not overwhelmed with fluid exiting the tunnel and therefore contaminating the environment with an overflow. The abrasive nature of the tunnel cuttings caused the pump impellers to wear very quickly requiring replacement every second day.

A mud motor with a Digitrak magnetic steering tool was chosen for the pilot hole drilling. The pilot drilling progressed on plan from the low end unit passing under the third stream near the 600m mark. At this location drilling fluid started exiting in a wide area in and around the stream in this gully. This gully was later named “Tunnel Gully” due to its close proximity to the tunnel used for the cast iron pipeline built back in the 1940s. Progressing the pilot hole under this gully led to the drill string becoming jammed.

It was suspected that sand falling into the pilot hole had packing behind the mud motor caused the tool to jam.

New down hole equipment was ordered from overseas and UUL went about salvaging as much of the drill string from the hole as possible. An explosive charge was feed down the drill string and 350m of rods were eventually recovered.

Grout injection was undertaken in tunnel gully to help stabilise the formation. When the new equipment arrived it was straight back into drilling the pilot hole.

Pilot drilling progressed 900m before a hard turn upwards under the last stream was required to meet the exit target 140m away and 40m vertical. However the mud motor failed to achieve the targeted vertical gains and the exit location was going to be over shot. Drilling on may have resulted in drilling into the existing cast iron watermain or exiting under the floor of the filter station building.

UUL conceived utilising a small drill rig to drill down the steep embankment and intersect the existing pilot hole nine metres below the stream and 40 metres below the small drill rig platform. The difficulty of this manoeuvre was no small feat. The small drill had to land its drill string into a 260mm diameter pilot hole like landing an aeroplane. Simply drilling straight to the existing pilot hole would not work. The steep and densely vegetated embankment and depth of the drilling made the operation very tricky. The drill string had to achieve a depth of 18 metres before arriving under the stream on line and grade. Every longitudinal metre had a different grade to achieve as it bent around to eventually match the target grade. A survey and computer bore plan was undertaken for the shot and recalculated every 15m.

The extremely skilled drill operator “Tim Mitchell” and supporting crew successfully landed the drill string into the existing pilot hole creating a 1km path through the job for the first time. 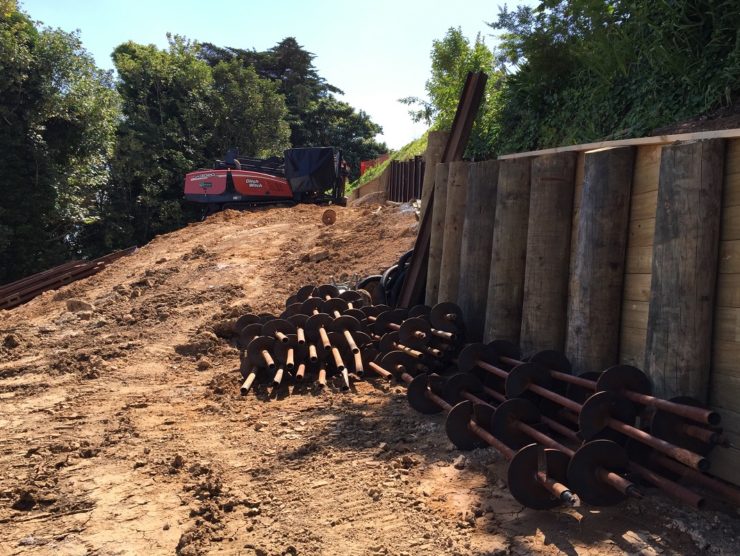 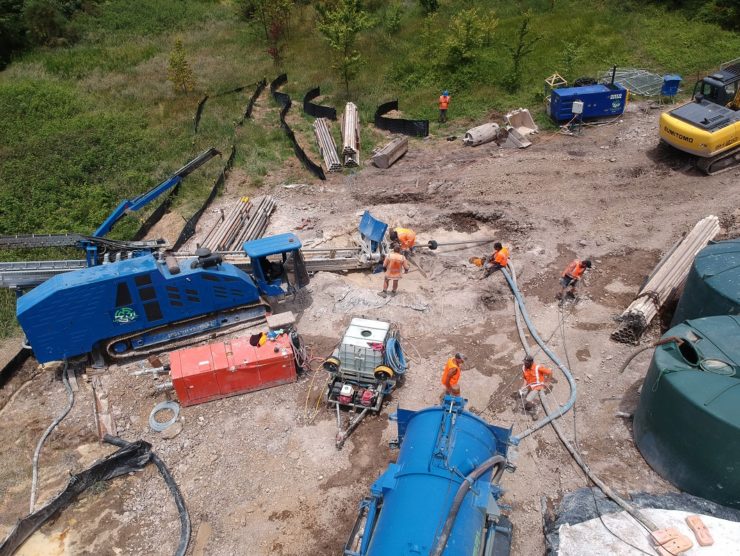 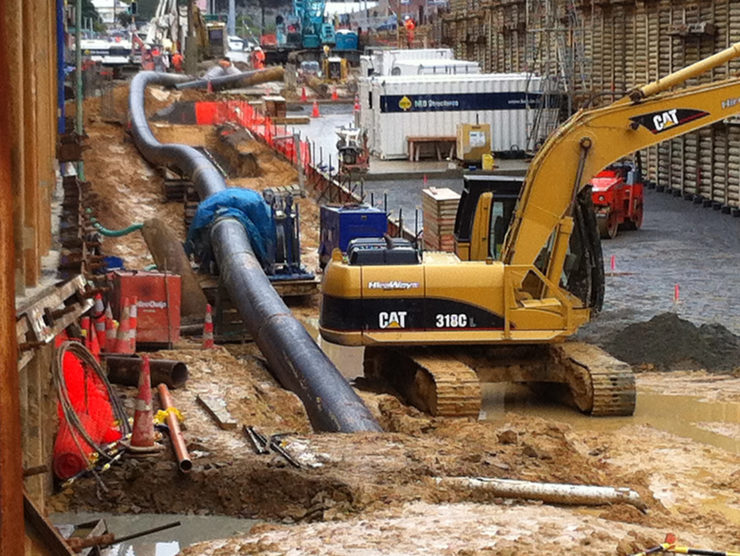